It’s always great to see the Kotlin Multiplatform (KMP) library ecosystem continuing to grow and a relatively new addition to that is Realm which describes itself as “a mobile database that runs directly inside phones, tablets or wearables.” and “a replacement for SQLite & ORMs”. An added positive is fact that it’s another example of existence now of multiple different KMP libraries addressing particular functionality…with for example SQLDelight, Kodein-DB, and, somewhat indirectly, Apollo GraphQL libraries providing persistence capabilities (previous articles here have described integrating those). Realm KMP library is in developer preview right now, and is still undergoing active development, but I thought it would be interesting to explore adding it as persistence layer for a KMP sample, FantasyPremierLeague, that I created recently (note that the changes shown here have been pushed to the realm branch of that repo).

Check out the story of Realm's Kotlin Multiplatform SDK!

Learn what motivated their Engineering team’s decision to build a new SDK and the key design principles that guided their development.https://t.co/EnKFGoqVLj 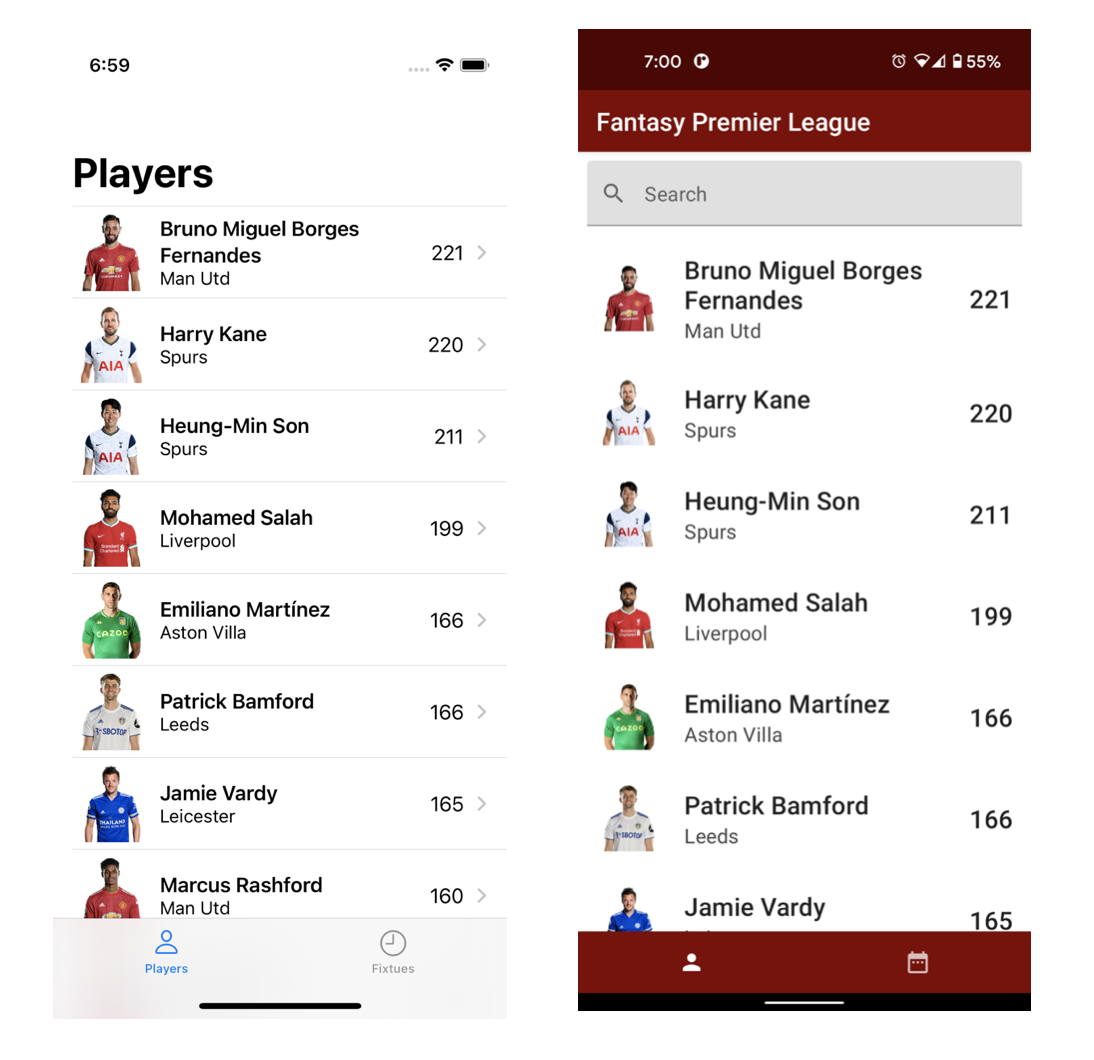 To use Realm in the project we firstly added following to root build.gradle.kts

And, in build.gradle.kts for the KMP shared code module, we add:

The FantasyPremierLeague repo includes a class, FantasyPremierLeagueRepository, which exposes API from shared code for accessing for example list of players and game fixtures. In initial implementation there was no persistence and each time these methods were called they’d make remote API requests (using FantasyPremierLeagueApi which in turn makes use of Ktor library).

To start using Realm we firstly need to define our data model as shown below. Note here that both PlayerDb and FixtureDb refer to TeamnDb .

Next up we create our Realm instance

Now we can start using this to write data to the database and also to observe database changes which we’ll ultimately now use to drive updates to the UI. In our initial basic implementation we read data from remote api endpoint and store to database on startup using following.

Now we can observe updates to the database using following code. Any changes are mapped to the data model classes that we’re exposing from our repository (e.g. Player and GameFixture) and stored in StateFlow variables.

And then in our Jetpack Compose code we can finally use this to show list of players in UI.

This is then what our iOS Swift ViewModel looks like

And finally this is part of SwiftUI code used to render the list of players.

Got chance this evening to make some small final updates to article about trying out @realm's new Kotlin Multiplatform library in FantasyPremierLeague repo (https://t.co/4Bh5TzZM60)https://t.co/GllhF7su13 https://t.co/FICGkxQHX5